Jai Kanhaiya Lal Ki! Join the joyful and auspicious celebration of the birth of Lord Shri Krishna right from the comfort of your home. Participate in the two day festivities and enjoy a variety of fun and spiritually elevating activities. 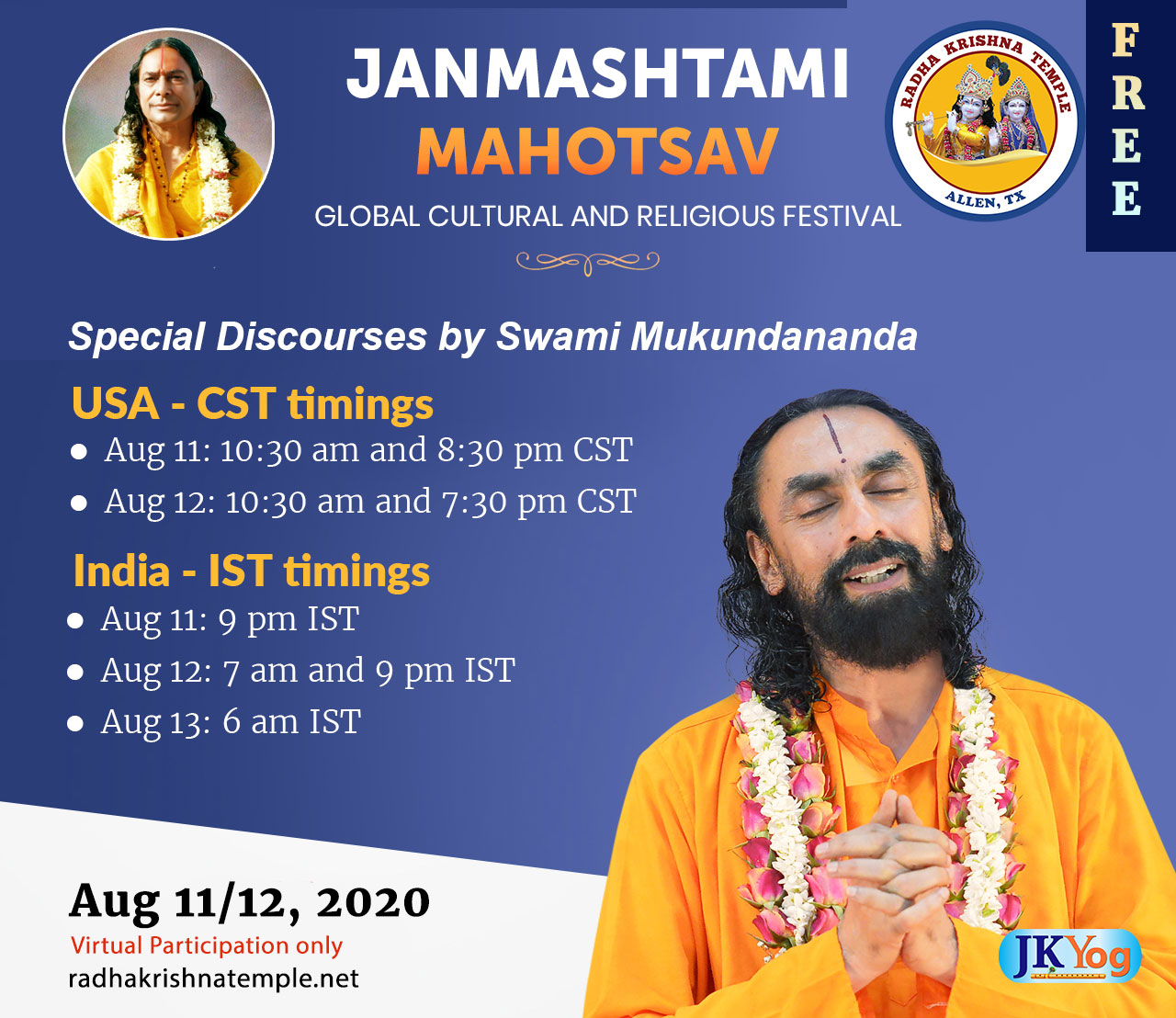 Relish beautiful discourses by Swami Mukundananda on the special occasion of Janmashtami! 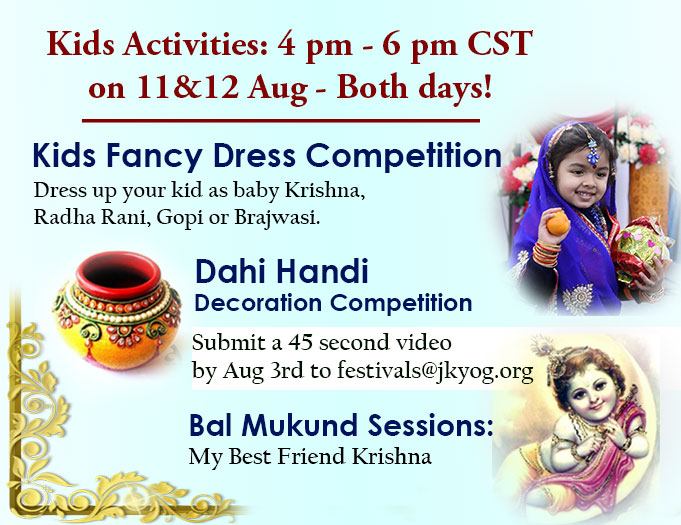 Also, email a 45 seconds video to [email protected] by August 3, 2020. The best entries will be streamed on the Radha Krishna Temple YouTube Channel. 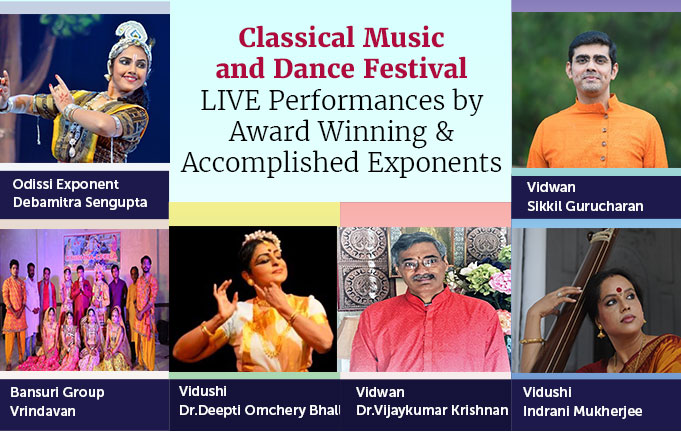 A confluence of classical artistic talents is planned that will truly enthrall the art connoisseurs and devotees of Lord Shree Krishna across the world! Enjoy the rich classical art forms that are sure to entertain and enrich you with LIVE performances by award winning and renowned exponents of classical dance and music.

Shree Krishna Janma Midnight Celebration that is sure to transport all to the blessed time of the Lord's appearance!

For people in India, Click here for Seva Opportunities.

Join our WhatsApp group to stay connected and informed on the events! 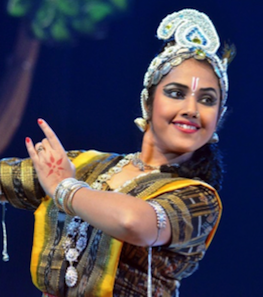 Debamitra Sengupta, internationally acclaimed Odissi exponent, a senior disciple of Padmavibhushan Late Guru Kelu Charan Mahapatra and Vidushi Sutapa Talukdar, has been appreciated both as a performer and a choreographer in the field of classical Odissi dance in India and abroad for the last three decades. Debamitra is an ‘A’ Graded Doordarshan Artist (National – Prasar Bharati), empanelled artist under the ICCR, Ministry of External Affairs, The Government of India, and empanelled artist under the Ministry of Culture, The Government of India. Debamitra Sengupta is also well-known for grooming new talents, teaching is indeed her forte. Debamitra is the founder director of her Odissi dance institution ‘Kolkata Mayur Lalit Dance Academy’ where she imparts lessons on techniques and nuances of this sublime Odissi dance form promoting rich Cultural heritage of India to more than 300 students including the underprivileged. In addition to performing in several prestigious programs all over India, Debamitra has presented Odissi recitals in prominent places of North America and her prestigious performances and, her Odissi Workshop tour to Canada – Ottawa, Montreal, Calgary, Saskatoon, Swift Current, Regina, Winnipeg) with her team as Cultural Ambassadors of India (under the ICCR, Ministry of External Affairs, Govt. of India) were highly appreciated by the august audience and connoisseurs at the international arena. Debamitra has also performed with her team at Myanmar (under the ICCR, Ministry of External Affairs) and Bangladesh (under the Ministry of Culture, Govt. of India), enthralled distinguished audiences all along with raving reviews from the press/media. Her keen interest in choreography has led her to experiment with unique forms like Padabali Kirtan, Sanskrit Epics, Classics from Bengali Literature, Odiya Folklore, Rabindra Sahitya – thus she created innovative movements and choreographed several fascinating productions in Odissi Style. 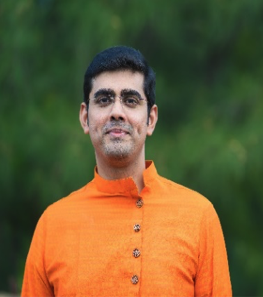 Sikkil C. Gurucharan is a leading Vocal musician and a youth ambassador for Carnatic music. He is a recipient of Nehru-Fulbright Excellence Award and a 51st Grammy Awards nominee for the collaborative effort – Contemporary Jazz Album “Miles from India”. Gurucharan, is a prime-time artiste during the two-month Chennai music season that is considered to be one the largest music festival in the world. He is a recipient of numerous awards including the prestigious Ustad Bismillah Khan Yuva Puraskar and Tchaikovsky Award for the best musician of the year among many other awrds. Gurucharan has not only made a mark in the traditional concert paddhati style but also worked to broaden audience appeal by creating collaborative projects with world-renowned musicians while retaining the spirit of the art form. In 2015, Gurucharan, as recipient of the Nehru-Fulbright Excellence Award, was in residence at UC Davis, California, USA. The magazine, India Today featured him among 35 Game Changers under the age of 35 in India. 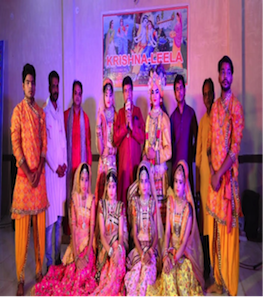 Bansuri the cultural society of this great land of Braj Bhoomi has been spreading Vaishnavite cult of Shri Krishna through dramatic art- Live Shows – more than twenty years in all parts of India. Braj Bhumi is that pious land where Bhagwan Shri Krishna overwhelmed Brajwasis (residents of Braj Bhoomi) with His childhood activities (Leelas). The Parikrama of Braj Bhoomi has many pious places from where Bhagwan Shri Krishna had given messages of Karma yoga through his leelas. Vrindavan has existed at the center of that great land inspiring many great saints and philosophers and has also called the Kalidah, the place where he enslaved the king of poisonous snake (Naga) amid Kalindi (Yamuna River). The Lord makes each one of the thousands of Gopikas to think of themselves as Radha. 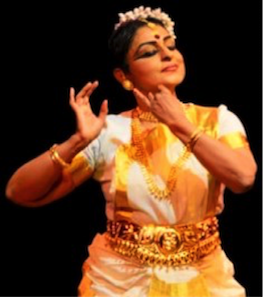 Dr. Deepti Omchery Bhalla, is a recipient of the prestigious Central Sangeet Natak Akademi award by the Government of India and the Kerala Sangeet Natak Academy award for her rare contribution to Mohiniattam, the classical dance form from Kerala, India. Deepti is an artiste of rare combination being a singer, a dancer, an author, a researcher, and an academician - currently a Professor of Carnatic music and Dean and Head in the department of music, University of Delhi. As a leading exponent of Mohiniattam over past three decades, her research findings have found expressions through her dance choreographies and music presentations that have been recorded and documented for National Archives. She has recorded Geeta Govinda Ashtapadis in Carnatic Music - A Multimedia documentation for XEROX, USA and IGNCA (Indira Gandhi National Performing Arts Centre) New Delhi.  She is a Top graded artiste of the Doordarshan (National TV Network), and is empanelled in the ‘Outstanding category’ by the ICCR, Ministry of external affairs, Govt of India. Her book, ‘Vanishing Temple Arts,’ that was exhibited in 2008 International Book Fair, Frankfurt, was received by Dr A.P.J Abdul Kalam, former President of India. Deepti has performed extensively in prestigious National International festivals. Her International festivals include: Festival Of India – U.S.S.R.(former Soviet Union) Fukoka Festival- Japan, Shamanika- Festival of Traditional arts, Korea  international festival of dance –Bosnia Music Workshop – SAMYO TARANG CHOIR - at Hope University, Liverpool, UK, Mohiniyattam workshop and performance – MILAPFEST, UK and has given concerts and workshops in European countries ,1992 - 2008, Slovakia, Czech Republic, Poland, Germany, Slovenia, Hungary, Croatia, Serbia, Zurich, Vienna, Luxemburg, Bonn, Berlin, Heidelberg, Castle, Black forest, andmma1925 Wolfsburg. 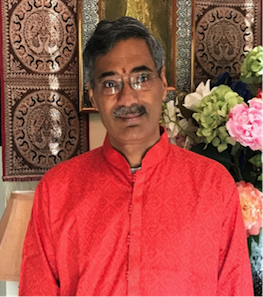 Vijaykumar Krishnan, Ph.D, is a fourth-generation musician, music teacher, and a researcher with a musical lineage steeped in classicism. Music became his passion early on in his life with a debut at age twelve followed by the prestigious Kasturi Ranga Iyengar Memorial Award at the Music Academy Madras. Although an IIT, IIM alumnus with an extensive corporate experience, Vijaykumar decided to pursue his passion by engaging full time in music research in sonic branding. His work is published in over twenty academic journals including, recently, in the Oxford Handbook of Music and Advertising, from the prestigious Oxford University Press. Vijaykumar has performed in hundreds of concerts, both solo and accompaniment on the violin, including multiple times at the Music Academy Madras, during the two-month Chennai music season that is considered to be one the largest music festival in the world, All India Radio mini national program and Doordarshan. He feels extremely fortunate to have had the opportunity to accompany musical stalwarts, notably, Dr. M. Balamurali Krishna, Vidwans Rama Lakshmana brothers, Vidwan Dr. D.K. Jayaraman, Vidwan Maharajapuram Santhanam, Vidwan T.R. Subramanyam, Vidwan Neyveli  Santhanagopalan, and Vidushi Aruna Sairam. His performances have been widely covered in the press. Vijay feels blessed to be able to volunteer his time for Bhagavad Gita study sessions and teaching Sanskrit. 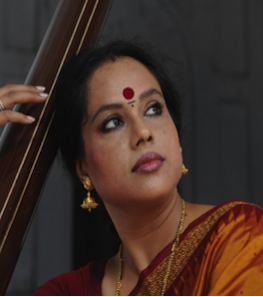 Join us for weekly satsangs, festival celebrations, and other events specially provided for your mental and spiritual growth and well being! Check out our upcoming events for more information and click on the calendar icon to get it added to your personal calendar! Don't forget to check out our "Classes and Workshop" calendar as well!