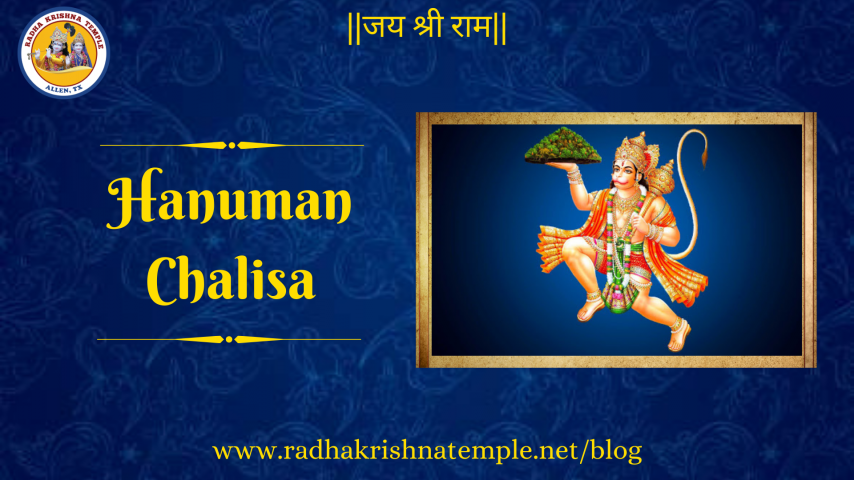 Hanuman Chalisa recitation has numerous physical, mental, and spiritual benefits. Devout followers of Lord Ram and Hanuman ji often recite Hanuman Chalisa (40 quatrains glorifying Hanuman Ji) every Tuesday and Saturday. This powerful prayer is packed with divine vibrations and can purify those who recite it or listen to it. Radha Krishna Temple of Dallas, a famous Dallas Hindu temple, will be conducting Hanuman Chalisa recitation and Tel-Sindoor Abhishek (anointing of Hanuman Ji with oil and vermillion), every Tuesday and Saturday from starting Apr 4th, 2020. Anyone can join these events online and partake in the ONLINE SEVA opportunity to offer Tel-Sindoor Abhishek to Hanumanji! Click HERE to register!

Goswami Tulsidas was an ardent devotee of Lord Ram and the author of the famous Ramcharitmanas. Once he received a vision of Lord Ram and was threatened by the ruling emperor to show evidence of it. Goswami Tulsidas responded that it is possible to receive the vision of God only through Bhakti. The emperor angrily imprisoned Goswami Tulsidas. While in confinement, Goswami Tulsidas composed the Hanuman Chalisa – glorifying the selflessness, bravery, intelligence, and humility of Hanuman Ji. On the fortieth day, it is said that monkeys surrounded the royal palace and wreaked havoc in the emperor’s court. Convinced of the divine power, the emperor released Tulsidas ji. Since then this prayer is believed to be extremely effective for courage and strength in difficult times.

Primarily, Goswami Tulsidas confirms that whoever recites the Hanuman Chalisa with faith and devotion, will be free from material bondage and attain eternal happiness at the feet of Lord Ram. Devout followers of Hanuman ji believe in the divine power of the Hanuman Chalisa, to fill them up with optimism, and confidence in the face of obstacles. Reciting or listening to the Chalisa, also inspires one to develop selfless love and the spirit of sacrifice for God, in the same way that Hanuman ji was devoted to Lord Ram. Our success or failure in life depends on the thoughts we harbor. The Hanuman Chalisa works to eradicate any mental negativity that stands in the way of expressing our divine potential.

Once, Hanuman ji saw Mother Sita, filling up the parting of her hair with Sindoor(vermillion) just as many married women do. He asked Her the reason and She mentioned that She does it for the good health and long life of Her husband, Lord Ram. Upon hearing this the innocent Hanuman ji thought, “If Mother Sita, the divine mother Herself applies Sindoor for Lord Ram’s sake, as a mere monkey I must do much more to ensure my master’s long life!”. He thus went and covered his whole body with Sindoor! Lord Ram and Sita were overwhelmed by the pure, childlike devotion and service attitude of Hanuman ji. Therefore, Lord Hanuman is offered Sindoor.

The planet Saturn is personified as Shani Dev. He is said to send obstacles in our lives to make us stronger mentally, physically, and spiritually after facing them. Once upon a time Hanuman Ji was engaged in service to Lord Ram and Shani Dev tried to create obstacles in Hanuman ji’s path. Shani Dev got caught in Hanuman Ji’s tail because of the interference. Hanuman Ji continued to merrily go about his work with Shani Dev wrapped in his tail! Poor Shani dev was wounded because of being tightly bound and he requested Hanuman Ji to pour oil over his wounds for relief. Therefore, Hanuman ji is also offered oil.

For the benefit of the readers, we have provided the lyrics and meaning of the Hanuman Chalisa in English.

(With the dust of Guru's Lotus feet, I clean the mirror of my mind and then narrate the sacred glory of

Sri Ram Chandra, The Supereme among the Raghu dynasty. The giver of the four attainments of life.)

(Knowing myself to be ignorant, I urge you, O Hanuman, The son of Pavan!  Lord! kindly Bestow

on me strength, wisdom, and knowledge, removing all my miseries and blemishes.)

(Victory of Thee, O Hanuman, Ocean of wisdom and virtue, victory to the Lord of monkeys who is well known in all the three worlds)

(You, the Divine messenger of Ram and repository of immeasurable strength,

are also known as Anjaniputra and known as the son of the wind - Pavanputra.)

(Oh Hanumanji! You are valiant and brave, with a body like lightening.

You are the dispeller of darkness of evil

thoughts and companion of good sense and wisdom.)

(Shri Hanumanji's physique is golden coloured. His dress is attractive, he wears Kundal(earrings) and his hair is long and curly.)

(Shri Hanumanji is holding in one hand a lightning bolt and in the other a banner; he has a sacred thread across his shoulder.)

(Oh Hanumanji! You are an expansion of 'SHIVA' and the son of Kesari.  Being ever effulgent, you

and hold vast sway over the universe. The entire world propitiates You are adorable of all.)

(Oh! Shri Hanumanji! You are the repository learning, virtuous, very wise and highly keen to do the work of Shri Ram,)

(You are intensely greedy for listening to the narration of Lord Ram's life story and revel in it. You ever dwell in the hearts of Shri Ram-Sita and Shri Lakshman.

(You appeared before Sita in a diminutive form and spoke to her, while you assumed

A huge form and struck terror by setting Lanka on fire.)

(He, with his terrible form, killed demons in Lanka and performed works for Shri Ram.)

(When Hanumanji made Lakshman alive after bringing 'Sanjivni herb' Shri Ram took him in his deep embrace, his heart full of joy.)

(Shri Ram extolled Hanumanji's excellence and remarked, "you are as dear to me as my own brother Bharat”)

(Sanak and the sages, saints. Lord Brahma, the great hermits Narad and Goddess Saraswati along with Sheshnag the cosmic serpent, fail to sing the glories of Hanumanji adequately)

(What to talk of denizens of the earth like poets and scholars ones etc even Gods like Yamraj, Kuber, and Digpal fail to narrate Hanuman's greatness in toto.}

(Hanumanji! You rendered a great service for Sugriva, it was you who united him with SHRI RAM and installed him on the Royal Throne.)

(By heeding your advice. Vibhushan became known in the world as Lord of Lanka

(Hanumanji gulped, the SUN at distance of sixteen thousand miles considering it to be a sweet fruit.)

(Carrying the Lord's ring in his mouth, he went across the ocean. There is no wonder in that.)

(Oh Hanumanji! all the difficult tasks in the world are rendered easy by your grace.)

(Oh Hanumanji! You are the sentinel at the door of Ram's divine abode. No one may enter without your permission.)

(By your grace one can enjoy all happiness and one need not have any fear under your protection.)

(When you roar all the three worlds tremble and only you can control you might.)

(Hanumanji's name keeps all the Ghosts, Demons & evils spirits away from his devotees).

(Those who remember Hanumanji in thought, word and deed are well guarded against obstacles in life.)

(Oh Hanumanji! You are the caretaker of even Lord Rama, who has been hailed as the Supreme Lord and the Monarch of all austere beings)

(Oh Hanumanji! You fulfill the desires of those who come to you and bestow eternal happiness)

(Oh Hanumanji! You magnificent glory is acclaimed far and wide all through the four ages and through the cosmos.)

(Oh Hanumanji! You are the saviour and the guardian angel of saints; and destroy all the Demons, you are the darling of Shri Ram.)

(Hanumanji has been blessed by Mother Janaki to grant eight Sidhis(powers) and Nava Nidhis(wealth) as per choice.)

(Oh Hanumanji! You hold the essence of devotion to RAM, always remaining His Servant.)

(Oh Hanumanji! through devotion to you, one comes to RAM and becomes free from suffering of several lifetimes.)

(You need not hold any other deity in mind; Hanumanji alone will give all happiness.)

(Oh, Powerful Hanumanji! You end sufferings and remove all pain from those who remember you).

(Hail-Hail-Hail-Lord Hanumanji! I beseech you to grace me as my ‘GURU')

(One who recites this Hanuman Chalisa becomes free from the bondage of the material world and attains eternal happiness.)

(As Lord Shankar witnesses, all those who recite Hanuman Chalisa regularly are sure to be blessed)

(Tulsidas who is always the servant of Lord Ram prays. "Oh, my Lord! Please make your home in my heart)

(O Shri Hanuman, The Son of the Wind God, The Embodiment of auspiciousness, please reside in my heart with Shri Ram, Laxman and Sita) 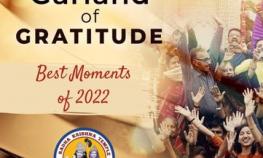 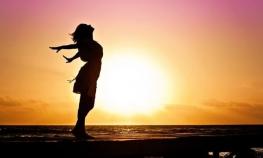 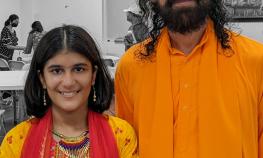 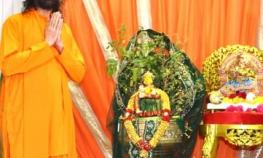 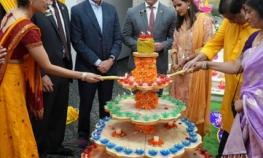