The temple bells chiming, its premises overflowing with exuberant devotees dressed in traditional festive fineries, mellifluous voices singing devotional songs brimming with bhakti, aroma of the Indian food wafting from Yugal Kunj (temple’s restaurant) was what Janmashtami celebrations at the Radha Krishna Temple of Allen were in a nutshell.

All roads led to the Watters Creek Crossing as the Radha Krishna Temple, popularly referred to as RKT, rolled out its triple-day extravaganza from 23rd to 25th August, 2019 while celebrating the Janmashtami Mahotsav.  This year particularly saw an unprecedented number of people show up to partake the grand celebrations. The temple’s parking lot was jammed with cars for it was unusually fuller than full and most people had to be redirected to park their cars at a nearby rented space.

Ask any attendee, and the first thing almost everyone unanimously quips is the striking aroma of food greeting them the first thing upon entering the portals of the temple. If the delectable naan paneer tickled their taste buds, the traditional South-Indian platters of tiffin foods like idli and tamarind rice almost had a gravitational pull, the halo of which was arguably hard to ignore.  As if the main course and snacks were not enough, the chaat stalls stationed in the temple premises teased everyone to check out the  Indian savories like the tangy bhelpuri, panipuri, and appease the burning throat with generous portions of kulfi and ice-cream, which also did a great job of beating the heat owing both to the month and the unbelievably large crowds that the temple attracted.

Sorry for the ones who could not make it, for the star attractions was not just the food, but various vendors as well who added color to the already vibrant atmosphere with their display of traditional Indian outfits, juttis, indigenous bags, trinkets and oxidized jewelry. It was just so easy to get lost in the pleasant din of the vendors and the buyers going over their chosen items, negotiating prices, and the latter gleefully walking away with the chosen outfit tucked under their arms, as if carrying a treasured hunt! The huge conglomerate of the stalls turned the celebration into a mini-mela, whichwas one of the reasons that the celebration garnered extensive attendance.

A more magnificent surprise awaited the attendees at the main prayer hall on the second floor that looked no less than Vrindavan (Lord Krishna’s birthplace) in its own right, all due to the aura it created. The hall was unspeakably ornate, (it had to be!) with especially the idols of Radha and Krishna dressed in prismatic hues. The devotional songs echoed through the walls of the hall and created a magical atmosphere where even the most diffident of the person shed all inhibitions and danced their heart out to ring in lord Krishna’s birthday at midnight.

The double-decked cake cut by Swamiji himself was when the celebration reached its apogee culminating in the traditional aarti sung by everyone present. The celebration may have technically ended, but the genuine effervescence of the people was still intact, slyly asking for more. If you are wondering the brain and body behind this gorgeously-curated event, once again it’s the robust team of Radha Krishna Temple volunteers, who worked several days and nights together to put up this spectacular show.

Shoppers at the mela

On the whole, the festivities, the delicious food, shopping booths, singing and dancing alongside Swamiji, and cake-cutting, had left everyone with one thought – that the Radha Krishna Temple of Allen is the place to celebrate any festival with magnificence and vibrancy!  So, check out the exciting calendar of special events and festivities coming up at the Radha Krishna Temple of Allen. 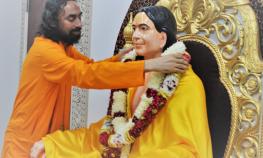 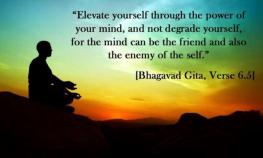 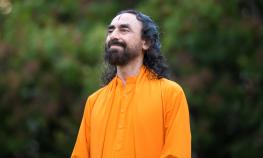 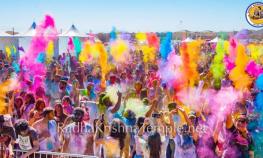